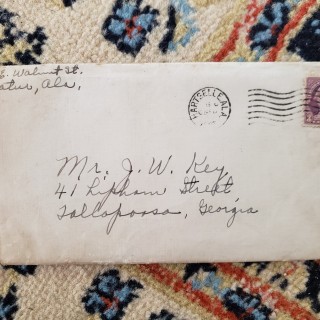 Welcome, I'm Jessica. I renovated and moved into my grandparents' old home in early 2018. When my grandmother Jane was alive, she loved to sit outside on a swing with her cat Boots (who still lives here) and read. As we were cleaning up around the house I found a box of letters sitting in a swing outside that she was going through in the time before she passed. I stored them away and recently started reading through them myself. 100 Years of Letters is intended to share those family letters (some of which are over 100 years old) with the world and to keep the history behind them alive. Curl up with your coffee, a cozy blanket, and possibly a cat, and join me on this journey through history!

It is such a human concept to always be looking to the future.  In nature, most species are more concerned with the present.  They are aware of their current surroundings as they attempt to stay safe from predators, find food, and procreate.  But not humans.  There seems to be something different in our nature that feeds a desire within us to worry about the future, and therefore continually take active steps to improve our current situation.

It reminds me of my favorite poem, “The Peace of Wild Things,” by Wendell Berry:

When despair for the world grows in me
and I wake in the night at the least sound
in fear of what my life and my children’s lives may be,
I go and lie down where the wood drake
rests in his beauty on the water, and the great heron feeds.
I come into the peace of wild things
who do not tax their lives with forethought
of grief. I come into the presence of still water.
And I feel above me the day-blind stars
waiting with their light. For a time
I rest in the grace of the world, and am free.

This concept is relevant in this week’s letters, which were written in 1919.  Due to high birth rates and immigration in the 19th century, much of the east coast was developed.  The United States Government wanted to encourage westward expansion, thus spreading democracy and capitalism.  President Lincoln signed the Homestead Act in 1862.  For an $18 filing fee and a promise of 5 years of residency, anyone 21 and older could claim 160 acres of public land to develop.  By 1934, 270 million acres of land had been given away by the United States.

Oklahoma was home to some of the most fertile farmland in the United States, which resulted in the Land Rush of 1889.   If you were an east coast farmer in the 1800s/early 1900s, Oklahoma was quite simply the promised land.

In this week’s letters, Lizzie Hancock, a young teacher from Round Mountain, Alabama writes to her cousin, Stella Key, regarding her father’s desire to move westward to Oklahoma: 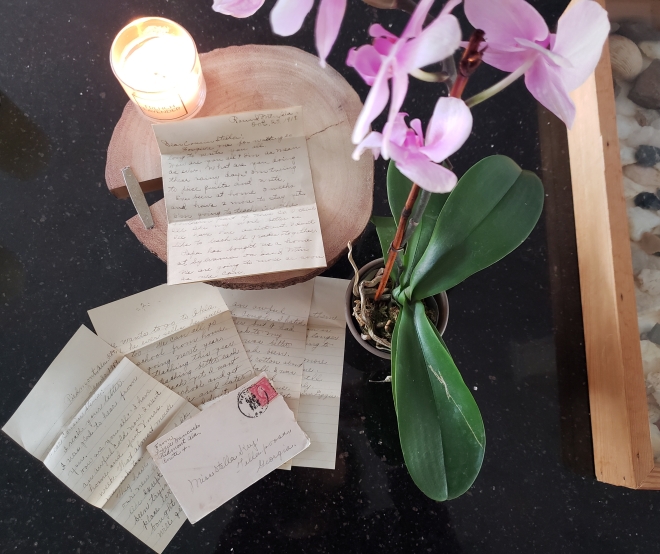 Forgive me for waiting so long to write you all.  How are you all?  I’m as mean as ever.  What are you doing these rainy days?  I’m trying to piece quilts and write.

I’ve been at home 3 weeks and have 2 more to stay yet.  I’m going to teach in the southern part of this co.  I think I’ll like my work better as I’ll have one assistant.  I don’t like to teach all grades together.

Papa has bought us a home at Sylvania on Sand Mtn.  We are going to move as soon as we can.  There is a good school out there, two miles from our home.

The farm cost $5,500.  It hasn’t a very good house but there is 160 acres.  I certainly am glad he bought after so long a time, but I don’t expect to live there very long, for Papa never has liked the mtn.  I think he wants to go out west and never will be satisfied until he goes.

I want to go to school this coming year but it seems impossible.  I want to go on and get first grade.

What has become of cousin Cora and Willie?  Would like to see you all.  I think if I ever do get time I’ll try to come to see you all.  I don’t want to teach next summer so I can visit some.  I’m going to grandma’s this week.  Haven’t seen her since last Xmas.  That seems awful but I’ve not been up there since then.

Uncle Lewis came Sun.  He said they were well as usual.

I must hush and get to sewing.  Excuse such writing.  Will try to write more next time.

Hoping this will find you all well and happy.  I am,

The next letter comes from Lizzie two months later, after the family moved to their new farm:

I rec’d your letter.  I was glad to hear from you.

How are you all?  I have an awful cold now.  I went home and spent Xmas week.  That almost made me sick too.

They have moved.  I like our new home.  They all like except Papa.  He has been trying to sell the place every since he bought it.  I hope he will get to liking better.  He wants to go to Okla.  If he ever sells he will go too.  We can all go to school from home.  I’m going next year.  I’m teaching this year.  I like teaching better each day I teach yet I want to go to school and get first grade and later lifetime.  I don’t know that I shall always teach but I would like to get so I wouldn’t be always taking examinations but could teach anytime.

Mamma is not well.  She has an awful cold and cough.  I hated to leave her but I had to come back to my school.  She was better than she had been.

Yes, I picked cotton about a month last fall.  I was busy teaching and sewing most of the time.  We made 16 bales that averaged 522 lbs. each.

You aught to see my Xmas presents.  I can’t tell you about all of them.  I got a nice vanity case and watch.  I was glad to get them as I needed them so bad.

The boys are mean as ever.  They are no longer babies but are going to school.

I would write more but I haven’t time.

Best wishes to all.

What I find most interesting about these letters is that it seems life is going well for the Hancocks.  Their crops are more fruitful than they will actually need, Lizzie is studying and growing in her career, and they have enough to buy a new farm and nice presents for each other.  But even with all that, they still find ways in which life could be better, easier, and more enjoyable.

I know I am guilty of this too, as many of us are.  These letters were written 100 years ago, and yet humanity has not changed much.  We still are driven by our future desires, ultimately unable to experience “The Peace of Wild Things.”

Welcome, I'm Jessica. I renovated and moved into my grandparents' old home in early 2018. When my grandmother Jane was alive, she loved to sit outside on a swing with her cat Boots (who still lives here) and read. As we were cleaning up around the house I found a box of letters sitting in a swing outside that she was going through in the time before she passed. I stored them away and recently started reading through them myself. 100 Years of Letters is intended to share those family letters (some of which are over 100 years old) with the world and to keep the history behind them alive. Curl up with your coffee, a cozy blanket, and possibly a cat, and join me on this journey through history! View all posts by 100yearsofletters